Boba Fett and the Limited Edition

At last night's Sony E3 press conference John Vignocchi took to the stage to present a segment on Disney Infinity 3.0 Edition, during that presentation he revealed that there will be a limited edition of the Starter Pack exclusively on PlayStation platforms that comes with the Rise Against the Empire Play Set at launch along with a Boba Fett figure and the usual Twilight of the Republic Play Set, of course. 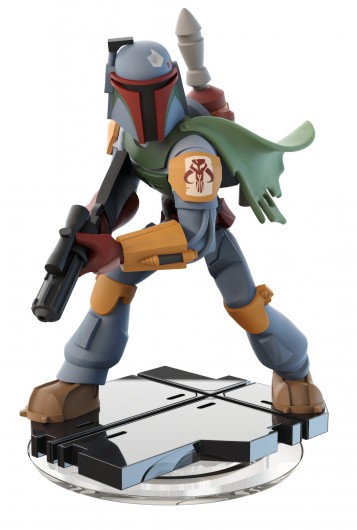 Rise Against the Empire will release one month after launch for other platforms and it's mentioned that the limited edition Starter Pack will be the only place to play as Boba Fett "before the holidays", but obviously the exact release date of the game will determine how long an exclusive that is.

The suggested retail price is set at $114.99 so while it might not save you any money or come with anything like the Frost Giant display we saw last year, it will get you content a whole month early.

I've not watched a single episode of the show so have no idea who these are but here are the four toys that will be available:

Here are a few screenshots of them in action within the Twilight of the Republic and Rise Against the Empire Play Sets:

Check out this article on StarWars.com for some in-depth discussion about the creation of the figures. And finally, the first couple of minutes of this week's Toy Box TV has some footage of the new characters (and plenty more in this week's live Toy Box TV from about 45:40).

Rise Against the Empire Images

A new batch of information for the Rise Against the Empire Play Set has been unleashed upon us. Several Youtube videos have gone up with previews for the Play Set including ones from Coin-op TV, FamilyGamerTV and GameTrailers.

And here are some new screenshots from the Play Set with a look at the figures too: