We've known what the 20 Power Discs for launch are for quite a while but now Disney have provided a video showcasing some of them as well as details on exactly what each one does.

The exclusive Power Discs Album from Toys R Us has space for another ten discs but as yet it is unclear how to get them.

Even with the launch of Disney Infinity less than a month away there is still plenty of time to show off even more Toy Box videos. This one kicks off with Sulley, Barbossa, Syndrome and Mater all collaborating to build a game of their own creation for Wreck it Ralph to play, and it goes on to tease you with the sheer number of types of game that are possible to create within the Toy Box.

There's also a whole new set of screenshots to take a look at.

The Disney Infinity Youtube channel is at it again, this time with a rather unique method of viewing the videos, press the big red button and you will get a randomly selected combination of two characters and an item and will then get to see a short video featuring that combination. 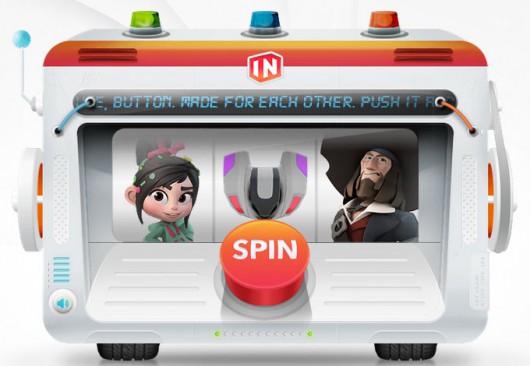 The number of combinations isn't quite infinite but there are plenty of videos to find (maybe 40 videos?), and seeing as it's randomly selected you may well be spinning for quite a while before you've seen them all!

Update: To save you that time I've included all of the videos after the break.

Phineas and Agent P at Comic-Con

This weekend at the San Diego Comic-Con saw the Disney Infinity debut of some handmade and handpainted versions of the Phineas and Agent P figures from Phineas and Ferb. 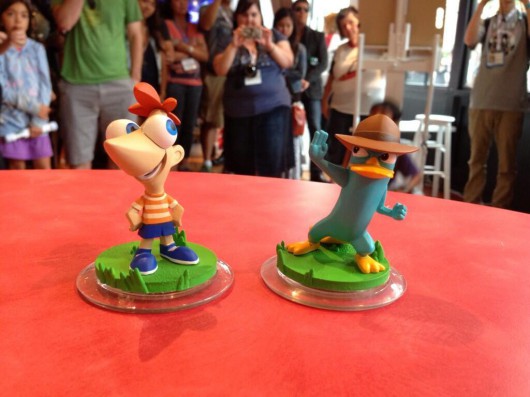 While the ten figures that were given out are fully functional in-game you likely won't see them at retail for launch.

The Incredibles Under the Spotlight

Following suit with all of the other Play Sets the official Disney Infinity Youtube channel has posted a set of brand new videos for each of the characters for The Incredibles Play Set, as well as the Play Set itself, naturally.

At the end of the compilation video you get a glimpse of the vault that you can unlock and find inside special "hidden content" when you have all five of the characters from The Incredibles Play Set.

And there's another new video about the Toy Box, this time it's about missions and you get to see a few of the challenges that are unlocked by each character.

There's also a whole host of new screenshots in our gallery:

Disney Infinity at the D23 Expo

At the D23 Expo next month (August 9th-11th) Disney are planning to showcase Disney Infinity in a presentation on the 11th (Sunday) and show off some brand new game features as well as to reveal some characters for the game that have yet to be seen. They will also be giving away a "never-before-seen" Disney Infinity figure for every fan in the audience.

And as for what some of those characters might be it's time for some rumours... by way of Disney Infinity France the folks over at Disney Infinity Fans have spotted listings for several new characters which includes several characters from this November's film release "Frozen", Anna and Elsa, and there's even a listing for Mickey Mouse himself.

Curiously there are also many listings for "crystal" versions of some existing characters, these seem to be slightly more expensive than the regular figures but no further details were given so who knows what they may eventually turn out to be.

BURBANK, Calif.--(BUSINESS WIRE)--Disney Interactive is inviting fans to experience the latest digital offerings from Disney at the D23 Expo, August 9–11, giving fans hands-on experiences, first-look presentations, and exclusive D23 Expo giveaways. With an unprecedented lineup of upcoming games and products, including Disney Infinity, Fantasia: Music Evolved and more, Disney Interactive is turning up the excitement with its largest D23 Expo presence ever including a show floor pavilion, daily presentations, and the D23 Expo Arena.

Pavilion Experience: Located in Hall B,the Disney Interactive pavilion lets Guests step into the world of interactive storytelling through hands-on experiences with the latest games and products from Disney Interactive. Gamers, fans and families will have the opportunity to discover Disney Interactive’s upcoming digital innovations bringing them closer to the characters and stories they love on the platforms and devices they use every day.

With exclusive collectible giveaways, still-to-be-announced panels and presentations, and first looks at the Fall’s hottest digital products, Guests won’t want to miss the surprises Disney Interactive has up its sleeve. Visit www.D23Expo.com and DisneyInteractive.tumblr.com for more updates leading up to the D23 Expo 2013.

To prepare for the launch of Disney Infinity next month Disney are sending the game off on a "Summer of Endless Fun" tour around a select few of the United States.

There will be activities at the events including a demo of the game as well as giveaways and contests. It all kicked off yesterday in the Downtown Disney District in Anaheim, California and will continue on through July and up to release in August, check out the list below for the locations and dates where they'll be stopping off:

The game is released on that last day so the ones in New York will be special events to mark the launch.

Kids and Families Will Have the Opportunity To Play Disney Infinity for the First Time Before It Launches On Aug. 18

BURBANK, Calif.--(BUSINESS WIRE)--Disney Infinity, Disney Interactive’s biggest and most ambitious video game to date, is embarking on a multi-city “Summer of Endless Fun” tour to showcase the most anticipated game of the year. The cross country road trip, which is free to the public, kicked off on July 7 in the Downtown Disney District in Anaheim, Calif. Players will get an exclusive sneak peek at the game before it hits store shelves on Aug. 18.

Zigzagging across the country, fans will get the chance to play Disney Infinity – featuring the innovative Toy Box mode that truly brings every kids’ imagination to life. Who hasn’t thought about building a world where Mr. Incredible uses a Monsters University toilet paper launcher while driving around in Cinderella’s carriage with monster truck wheels? Now players can let their imaginations run free and create their own adventures.

Disney Infinity is an all-new game platform that gives players the freedom to create stories and play experiences featuring characters from The Walt Disney Company and Pixar Animation Studios. Players can place real-world toy versions of beloved Disney characters onto a device called the Disney Infinity Base and transport them into the virtual game worlds of Monsters University, the Incredibles, Pirates of the Caribbean, Cars and The Lone Ranger, as well as into a giant Toy Box.

The amusing coincidence has not been lost on the Disney Infinity team as Yahoo posts a short video showing Captain Jack Sparrow (Johnny Depp) and Tonto (Johnny Depp) facing off, the trailer will apparently be played right before screenings of The Lone Ranger which is being released this week.

And in new rumours news, Stitch Kingdom have posted a photograph of a mock-up display for Disney Infinity, at the top of the photo you can see a lineup of characters very similar to an unfinished piece of artwork that was released back when the game was announced. It contains a few potential playable characters not referenced to since that time, namely Victor Frankenstein and Sparky from Frankenweenie as well as a few backing characters that are more like to just be NPCs. What is most interesting is an addition to the lineup, instead of The Underminer from The Incredibles you have two characters from the recent Disney movie Oz the Great and Powerful.