Several US retailers such as GameStop, Walmart and Toys R Us have now posted a new character to add to the launch roster for Disney Infinity this August. Randall "Randy" Boggs is a character from the Monsters University Play Set and will be sold individually as well as in a "Villains" triple pack along with Davy Jones from Pirates of the Caribbean and Syndrome from The Incredibles. 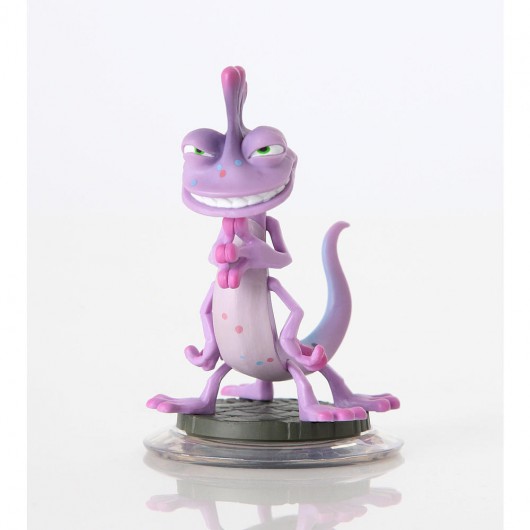 Several listings on Amazon.co.uk have also given more detail to the upcoming range of accessories that will be released alongside the game's launch. Full details can be found after the break.

The ESRB have posted a rating summary for a Disney Infinity game on the Nintendo 3DS.

This is a multiplayer “party game” in which players move Disney/Pixar characters around various game boards to compete in mini-game challenges. Mini-games include solving puzzles, racing, fighting, and collecting various items. Several mini-games depict characters shooting “cartoony” pistols, blasters, or cannonballs at ships or enemies/boss characters (e.g., droids, giant squid, pirates). A handful of mini-games require players to shoot other characters with projectiles, resulting in cries of pain and/or “dizzy-star” effects. One mini-game depicts a one-on-one battle with swords on a pirate ship.

Another grand showing off of the Toy Box mode in video form, with a video title of "Toy Box Heroes" they've set a focus on displaying the many different characters and franchises that are set to appear in Disney Infinity.

And this time they've even provided some new screenshots too, check them out in the Screenshots Gallery. There's even more film and TV franchises on display there for you to spot.

And now time for another official introduction to Disney Infinity, this one comes with new footage of playable characters like Buzz Lightyear, Woody, Jessie, Wreck-it Ralph, Vanellope von Schweetz, Ferb, Perry and even a glimpse of a Randall toy.

If you have a moment please take part in Curse's "How Do You Game" survey.