Today marks the release of the PC version of Disney Infinity 3.0 on PC. You can get the free download from the official website, Steam, or the Windows Store (if you're using Windows 10). 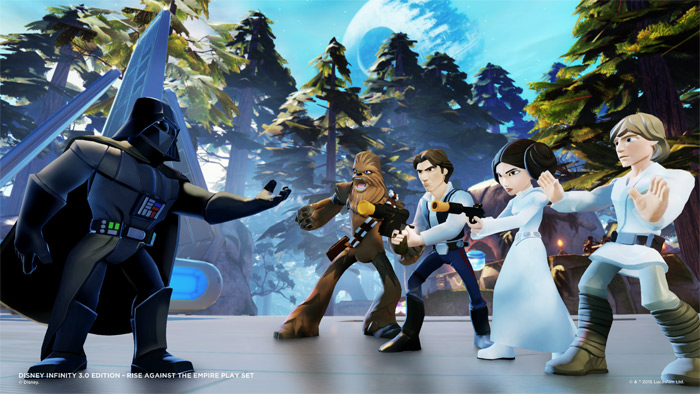 The PC game features the same full experience that you get in the console editions except that it does not use a base, you instead either buy characters digitally or you use the webcodes that come with the figures to unlock them.

You can still play the PC version even if you don't own anything, the game has a weekly rotating selection of characters that it'll let you try out. And if you're still after free characters you could try the Rewards program they're running where for every 10 friends you recruit you get a free character.

Additional features for the PC version over the console versions include Quests that you can complete to earn in-game rewards, a Daily Challenge (which is essentially just a round of the Hero Destroyer from Toy Box Takeover), and the ability to play demos of the Play Sets or Toy Box Expansions you don't already own.

The game is full to the brim with micro-transactions so be careful what you click on.

The systems requirements, as seen on the official website, are as follows:

Not content with just the reveal of a new Captain America figure and two new Star Wars The Force Awakens figures the internet has discovered an image that shows off three of the possibly four remaining Marvel figures.

The above image was found as part of a compatability chart on Amazon.com and shows off figures for Vision, Ant-Man, and Black Panther.

If the numbers provided by John Vignocchi earlier in the year hold true then we still have one more mystery Marvel figure to find.

The Force Awakens for Disney Infinity

Following hot on the heels of the first look at the Marvel Battlegrounds Play Set at the weekend, we have our first glimpse at the toys that will be a part of the upcoming The Force Awakens Play Set.

We saw Finn and Rey at the D23 presentation earlier this year but now thanks to several pre-orders that have gone live we have confirmation of another two characters that will be native to the set: Kylo Ren and Poe Dameron.

There are also listings for a pack of Power Discs based on the film, however the image provided is just a set of blank discs. The retailers did however give a description of the discs: "Finn's Stormtrooper Costume", "Poe's Resistance Jacket", "Resistance Tactical Strike", and "Quad Jumper".

The Play Set and other accompanying toys are scheduled for release on the same day as the film: December 18th.